Haarlem is just on the left-hand side of Amsterdam. It’s the provincial capital of Noord-Holland. Not even a lot of Dutch people know that (unless they paid attention during geography lessons at school).

De Hofjes. These small gardens surrounded by tiny houses are a typical feature of Dutch towns. During the Golden Age (16-17th centuries), the wealthy merchants built these courtyards as charity for the poor, elderly and the needy. Today, they are places of peace and tranquility whilst the daily life passes outside its gates.

Teylers Museum. The oldest museum in the Netherlands, an interesting mixture of science, paleontology, art and numismatics. They are renowned for their thoughtful exhibitions.

The city centre of Haarlem is a dream for shopaholics as well as restaurant addicts. Leave out the regular shopping chains, bring in the unique (and expensive) shops for shoes, clothes, as well as art galleries and second-hand book shops.

Carlton Square Hotel is a perfect spot for a weekend in Haarlem. It is a comfortable, Art Deco style hotel just outside the city centre. They have nice arrangements for shopping, Christmas and short weekends. 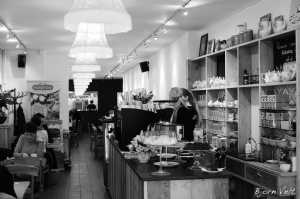 You can eat breakfast at Hartig & Zoet, they have a number of smaller and larger breakfasts to choose from. Heartwarming scones and latte macchiato!

Have your organic lunch at Jetties, not far from the train station. A nice, open space self-service restaurant. They serve a delicious lamb burger with tzaziki and crunchy fries. All home-made and very fresh.

For diner, there are so many different kinds of restaurants, Japanese, Indian, Mediterranean, Dutch, French, to choose from. We had a lovely 3-course meal at Subliem. This is cooking mediterranean style with fish, meat and vegetables hand-picked by the chef that morning with strong hints of Egyptian flavours. A treat!
↑ Back to Top

The Patron Saint of Haarlem

Everywhere you look in Haarlem, you’re confronted with the name St Bavo. Who was this Saint Bavo? Let’s not confuse him with Bonno (aka Bavo), abbot of Corbey in Saxony. Ours is the Flemish Bavo and his sainthood recognised by both Western Christianity and Eastern Orthodoxy. His name day is October 1, the same date he died. The sources are quite unclear about when he lived: some say between 589-654, 589-653, Wikipedia has a very decisive 622-659.

One thing all the sources agree on, is that Bavo, or Alwin as they call him during his life, is a happy-go-lucky knight from Ghent. He has it all, lots of money and marries a wealthy girl. Life in general, but especially his materialistic life, is very good to him. Or, in more devout terms, he is wild and leads an incredibly shallow life. He and his wife have one daughter, Aggletrudis, a devout woman. That’s the first sign. When his wife dies, he does not seek to remarry. A second sign. Not long after her death, he hears a sermon by the saint Amand, a French missionary trying to convert Flanders for the Merovingian king Clotaire II. After this sermon, Bavo is a different man. He spends his money building a new abbey and gives the rest to the poor. He follows Amand as a monk on travels to distant lands and concludes his day as a hermit (interesting source, Trouw, 1 Oct. 2008).

All these sources are rather short or vague about the one thing that is essential for anyone to become a saint: miracles. Most descriptions of Bavo’s life say that the usual miracles happened on his grave. Yes. Alright. That’s fine if you put it like that. But which ones? What happened? There is only one source that states matter-of-factly that Bavo exorcised the demon out of a woman possessed. Another source says he brings a dead person back to life, but alas, this web site does not given any references…. just when it gets interesting!

Bavo’s link with Haarlem is said to have begun with Hildegard, the wife of the Count of Holland, Dirk II (see Historische Canon van Haarlem, 2008). In 1274, Haarlem was besieged by the Kennemers and Bavo came down from the heavens to scare away the besiegers. From that day forward, Bavo was named patron saint of Haarlem. And befitting Christian traditions, the two most influential churches in town were named after this saint.

The first church called St Bavo on site in Haarlem, existed in 1245. Halfway through the 16th century, Haarlem receives its own diocese and the church is called a cathedral. However, as with many Catholic buildings its interior is ruined by the iconoclasm during the Dutch Reformation. The church is then used as a Protestant house of worship. There is another beautiful legend about the statue of St Bavo on the church itself during the iconoclasm. The sword Bavo is holding, cuts through the ropes that three men have tied around the statue to tear it down to the ground. Instead, the three men fell to their death on the cobbled stones of the square as the ladder they were standing on, collapsed.

The diocese is not restored until 1853 and by that time the new bishop decides it is time to build a new cathedral (see below).

One of the beautiful aspects of this church is its wooden ceiling, as you can see in Bjorn’s fantastic panorama shot.

Another majestic appearance is that of the large (pipe) organ. It has its own entry on Wikipedia! This organ is made by Christian Müller, built in 1735, for the city council of Haarlem who wants to show off their wealth and stature. By the time the organ is finished in 1738, it is the largest in the world. Not long after the great composers played on it; Mendelssohn, Händel en Mozart (at 10 years old).

Last but not least, the great painter Frans Hals and the great writer Willem Bilderdijk lie buried in this church. Between 400 other graves, that is.

The first idea for this particular cathedral is conceived in 1893 by the bishop of Haarlem. He hires the architect Joseph Cuypers, son of the famous Pierre Cuypers who is considered to be the founding father of Dutch modern architecture. Though mainly interested in the build and restoration of churches, from Pierre Cuypers’ hand are also  Amsterdam Central Station and the Rijksmuseum (National museum). Curiously enough, it turns out that the people of Amsterdam thought Pierre Cuypers’ Rijksmuseum was too Roman Catholic in look and feel for their city! At the end of his life, Pierre leaves most of the work to his son Joseph and it is he who finishes the cathedral in Haarlem. After 35 years, in 1930, the cathedral is ready. It is the only cathedral built for this purpose in modern times in the Netherlands. Better yet, in 1948 is has been promoted to a basilica. This is an honorary title for roman catholic buildings and can only be given by the Pope himself. For more information, see also the web site of the cathedral.

Alas, the building was closed when we visited Haarlem, for we were very curious to see the inside. The outside, apart from the two towers at the front, was hidden behind scaffolding.

It’s a bit strange that we didn’t manage to get an image of another thing Haarlem is famous for: the train station of Haarlem. So, we try to make up for it here!

The first railway in the Netherlands opened in 1839 between Haarlem and Amsterdam. Trains were the planes of the 19th century. It was unheard of how fast one could travel from one town to another. The first train had two locomotives called Snelheid (“Speed”) and Arend (“Eagle”). They could reach 90 km/hr but had an average speed of 40 km/hr. It took 25 minutes to get from Amsterdam to Haarlem on the first trip (source: www.schoolbieb.nl). 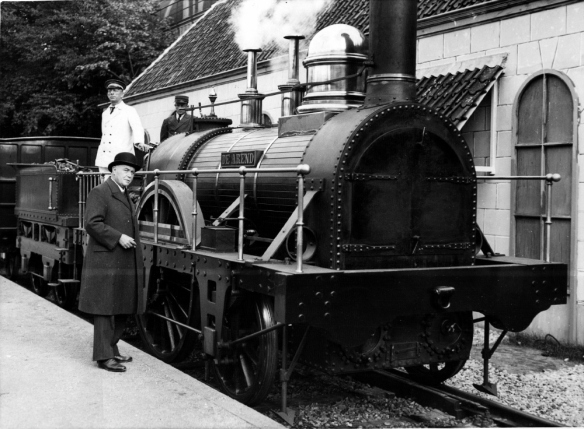 Just short of two centuries later, we took the train to Haarlem. It took us longer than 20 minutes, but then we were not coming from Amsterdam or travelling at 40 km/hr. Over time the National Railway services have changed and improved immensely. Though, after its privatisation in 1993, there have been curious incidents with service. Autumn leaves were suddenly turning round train wheels to squares causing trains to break down, as if leaves have never fallen before in autumn. Another one was the company forgetting to turn on track heating when it’s freezing minus 10. Yet trains are still a safe way to travel and they are reasonably on time. In the western part of Holland where the large cities are slowly growing into one big metropolis we call De Randstad, you don’t try to get around by car. I mean, you can, but it will take you twice as long and you pay very, very high parking fees.

Train is the best way to travel and arriving in Haarlem train station is like going back in time. The original art nouveau features from 1906 have been retained. Have a look at this wonderful impression by Truusbobjantoo on Flickr:

The former waiting lounges have found new use as well. A salsa dancing company is located in one of them, the public library in another.
↑ Back to Top